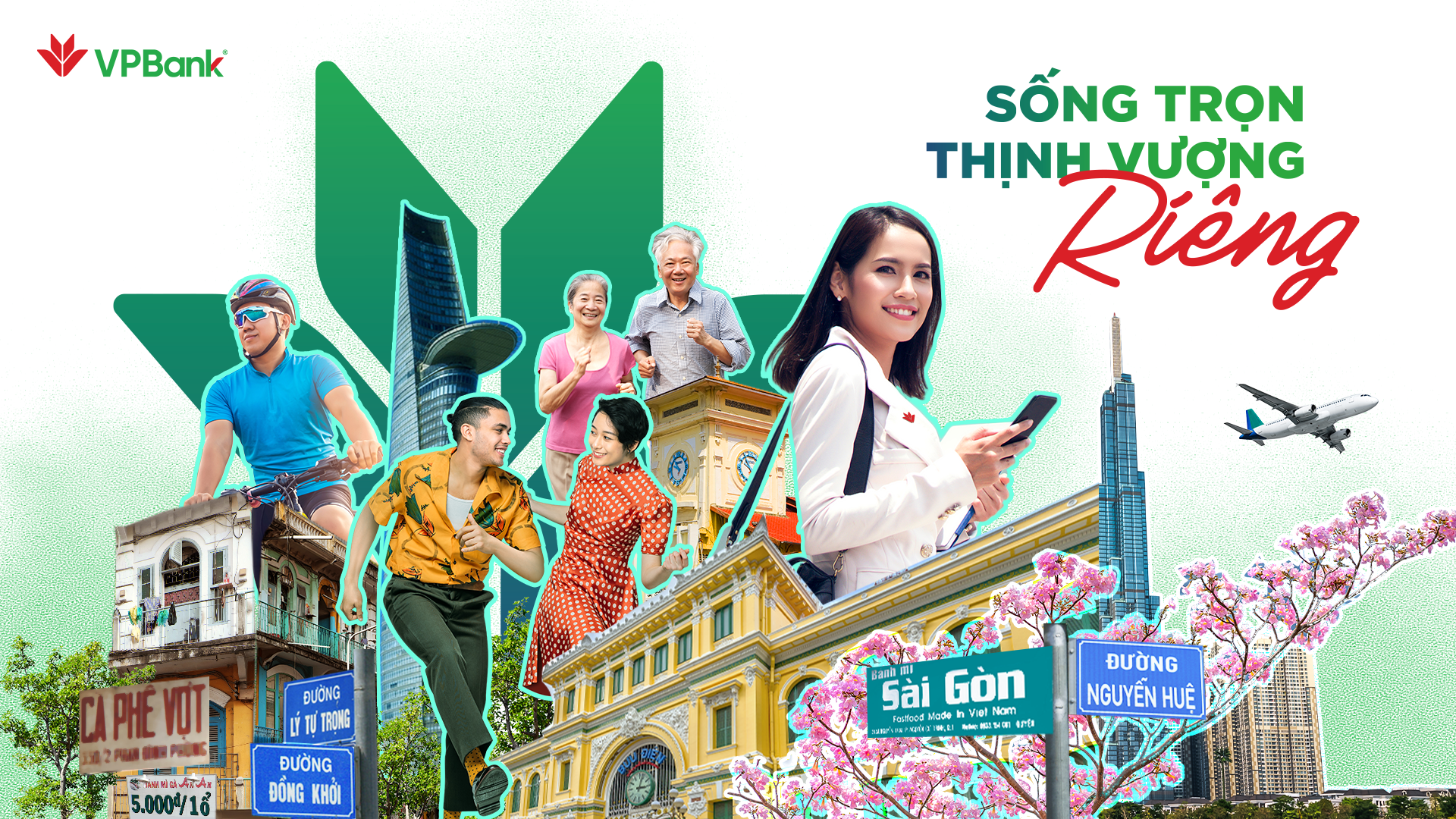 Use the post-pandemic context with the story of Saigon after this land has suffered many losses in the past time fighting the pandemic.
Khoai Lang Thang is a travel youtuber famous for the images, content that can bring out authentic footages. He was born in Ben Tre and currently living and working in Saigon. Being an engineer but already quit his job, he carried his backpack, travel here and there along the country to make vlogs and fulfill his passion. It is the idyllic, friendly, and natural lifestyle of him that have been warmly received by the community, especially young people.
With Khoai Lang Thang’s journey, instead of leading consumers to a genera and kind of vague concept of Prosperity, VPBank goes hand in hand with different definitions of prosperity in the way inspiring each person to live their life to its fullest. Saigon is pleased to carry on the new pace of life which is a prosperous city and from there, VPBank will keep fueling a prosperous Saigon where many strong new lives are sustained and adapted after the pandemic and filled with joyful and positive emotions.

Khoai Lang Thang, whose real name is Dinh Vo Hoai Phuong, is a vlogger with a humongous number of fans on YouTube with more than 1.81 million subscribers, Facebook page with 1,945,678 followers, average engagement of 10k per post, Instagram 156k followers, Khoai Lang is ranked in the Mega-influencer group - a group with the highest ranking in the influencer classification by popularity.

Mood and tone of the campaign is the desire to convey the concept of prosperity to each individual of every small community in Saigon. Therefore, any individual who owns a vlog traveling here and there, at the same time experiencing the culture of each region will facilitate the sympathy of public toward the campaign surge with ease. The filming style that Khoai had is very authentic, simple along with the handsome appearance and warm voice has helped him win the hearts of numerous fans. Speaking of Khoai Lang Thang is a recall to the closeness and simplicity that he brings out. These are also the emotions that VPBank wants to carry out through the Prosperity Living campaign.

During the past 2 years of epidemic, COVID-19 has been a very complicated and unpredictable disease, so Khoai Lang Thang wasn’t able to travel here and there. During the previous occasions he could have gone to Ben Tre with his family but this time due to the complicated pandemic, Khoai chose to stay because he fully understands the difficulties of Saigon going through in the past time, so Khoai's experience will be more suitable with the backgrounds that the campaign has built.
With the aforementioned factors, Khoai Lang Thang is quite a perfect choice for the video and the campaign spirit this time in general. What’s more, through the feedback below the video post of Khoai can see the positive emotions and the audience can fully understands the message of the video.

Key asset: Video “Tết trọn Thịnh Vượng Riêng" (“Tet filled with your own Prosperity”)
Video content:
Leading this journey, Khoai Lang Lang, a travel blogger with his bold southern authenticity, will join VPBank to tell about the private life of a bustling Saigon on the Tet Holiday. VPBank together with Khoai explores numerous stories that touch the heart of many people with desires for prosperity throughout Saigon in the days leading up to Tet. In the video we can see each street corner with the stories that touch the heart of many desires for prosperity throughout Saigon in the days of Tet.
With a heartfelt voice, the video is like the touching words of each Saigon child, with the desire for a more prosperous life, filled with full of their own desires in the time of the new year with many new hopes. Thereby, the video sends words of encouragement from VPBank to Saigon and every citizen’s hearts. Storytelling plays a substantial role in increasing the sympathetic emotion toward the clips. And from Saigon's its own story, VPBank expands on the message: “VPBank's mission for a prosperous Vietnam starts with each prosperous individual!”
Interactive activities: Share the favorite moment of Saigon Lives Your Own Prosperity through minigame.

In particular for press platforms such as Zing News, Kenh14, Tuoi Tre, Dan Tri,... The review included 15 articles over a 4-week period with an average posting frequency of 4 posts per week and a total view of approximately 79,500.