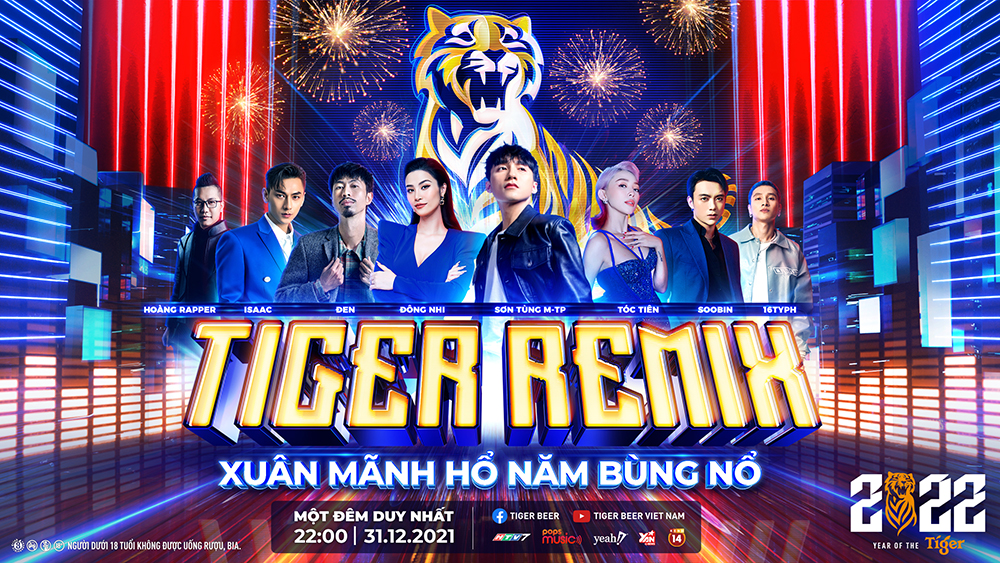 Tiger Beer – the number one premium beer in Asia since 1991, and also the top popular beer brand in Vietnam. By launching Tiger Remix in 2015 – an annual Music Event to welcome the New Year in major cities across Vietnam, attracting millions of fans every year, Tiger aims to bring unique and extremely attractive experiences to both artists and consumers with Uncage Spirit of Tiger brand by the excellent performances, leading artists, choreography with the first remix versions of their top hits - showing the uncage spirit of the artists. In addition, it also challenged consumers to perform together with artists on Tiger Remix stage.

Facing a lot of challenges and barriers for offline concerts due to pandemic situations since 2020, but as a brand representative for Uncage Courage Spirit, Tiger has always been a pioneer in doing things differently with no hesitation. They keep celebrating the New Year by exploring different way out for Tiger Remix 2021 and 2022 with innovative formats – Virtual Music Event, and engaging tactics to bring amazing experiences to audiences.

Especially, 2022 is the Tiger year, which is completely the year of Tiger brand, this year they focus on key communication message “Explosive Year Of The Tiger” – “Xuân Mãnh Hổ - Năm Bùng Nổ”, aiming to show the uncaging with courageous throughout communication activities and want to inspire consumers about this spirit – Tiger Remix 2022 is the first kick start of the year. It was a collaboration of both the most modern technology and the leading artists in Vietnam, which expected to bring an explosive music concert to celebrate New Year.

New media behaviors arise in Covid time and have prolonged as new norms. Digital consumption increased with double online time spent (312 mins/ day in 2021 vs. 148 mins/ day in H2 2019). In terms of the need of entertaining content and engaging connection during pandemic, Social has experienced an aggressive increase in users across top 3 popular platforms (Facebook increased 27%, Youtube increased 26%, Tiktok increased 36% in Q2 ’21 vs. Q4 ’20). In which video live streaming has been emerging as a big trend (time watching live streaming increased by 220% during Covid period), thanks to its live interaction possibility, that enables users real time engaging and connecting with brands, with KOLs and with their communities.

Being agile to adapt with the situation bring an offline concert to online, yet still keep the original spirit of Tiger Uncaging Courageous. Tiger Remix 2022 is an innovative virtual music event with highly engaging activities, hosted on Social channels and broadcasted across TV and Digital channels, driving a massive coverage scale for one of the hottest shows in festive season.

Tiger Remix 2022 happened on New Year’s Eve (December 31st 2021) to celebrate an explosive new year, so Tiger had a proper social communication plan to maximize awareness and call users to join the online event with 100% budget focus on Digital platforms (PR, Media and Social). In which, 70% investment is for Social, focusing on 3 key phases.

Phase 1 – Teasing Pre-Event:
Around one week before the Event happens, Tiger initiated highly engaging activity via AR Filter for users to interact, and gain attractive rewards. In which, users showed their excitement and curiosity when exploring the artists line up of the event, as well as freely guessing how the artists will remix their hits and inform them about the event. In addition, we also leveraged the top popular communities to trigger users stay tuned till December 31st 2021.

Phase 2 – During Event:
Tiger Remix 2022 was hosted officially on Tiger Youtube Channel and Tiger Facebook Fanpage, which was crossposted livestream on more than 60 community fanpages, OTT and TV channels. With this strong and massive scale channel list, it had driven huge awareness and views for the event.

The show did not only attract users by the hot artists, but also by the visual investment and the awards of engagement activities during livestream. XR technology is the new innovation of combining reality and virtual environment view for users, which is multidimensional space for artists to perform, bringing extremely sharp visuals. Furthermore, during the event there are 3 unexpected explosion moments for users to collect hundreds of vouchers when no. of comments hit a certain level. Beside that, there are minigames among each chapter of the event to trigger users' lively interaction with the show and drive their friends to join.

Phase 3 – Amplify After Event:
As Tiger Remix is a Countdown event to the New Year, with surprising and explosive performance from the top artists, Tiger have done different ways of amplifying for the event. Instead of amplifying after event 1 day, we re-up cut-down performances of the artists on relevant community fanpages right after their live performance. Which helped hype-up the heat of the event and gaining more new users to join the livestream event.

Following the new norms of user media behaviors after Covid, Tiger invested 100% budget on Digital channels, with 70% focusing on Social since this is the most effective and relevant channel for online entertainment show which officially hosted on social platform like Youtube and Facebook, while PR and Media played the role of spreading stronger for the event.

On Social, Tiger focused completely on Community fanpages taking good learning from Tiger Remix 2021. But instead of allocating heavily on News Community fanpages beside the mass ones, this year Tiger minimized news channels, focused around 55% for the top popular and mass community fanpages, then expanded to variety of community genres with 45% budget like Music, Showbiz, Celebrity's Fandom, Top Entertainment Networks (Yan & Yeah1), and rising GenZ communities, … which strongly helped maximizing coverage and attracting more users for the event.