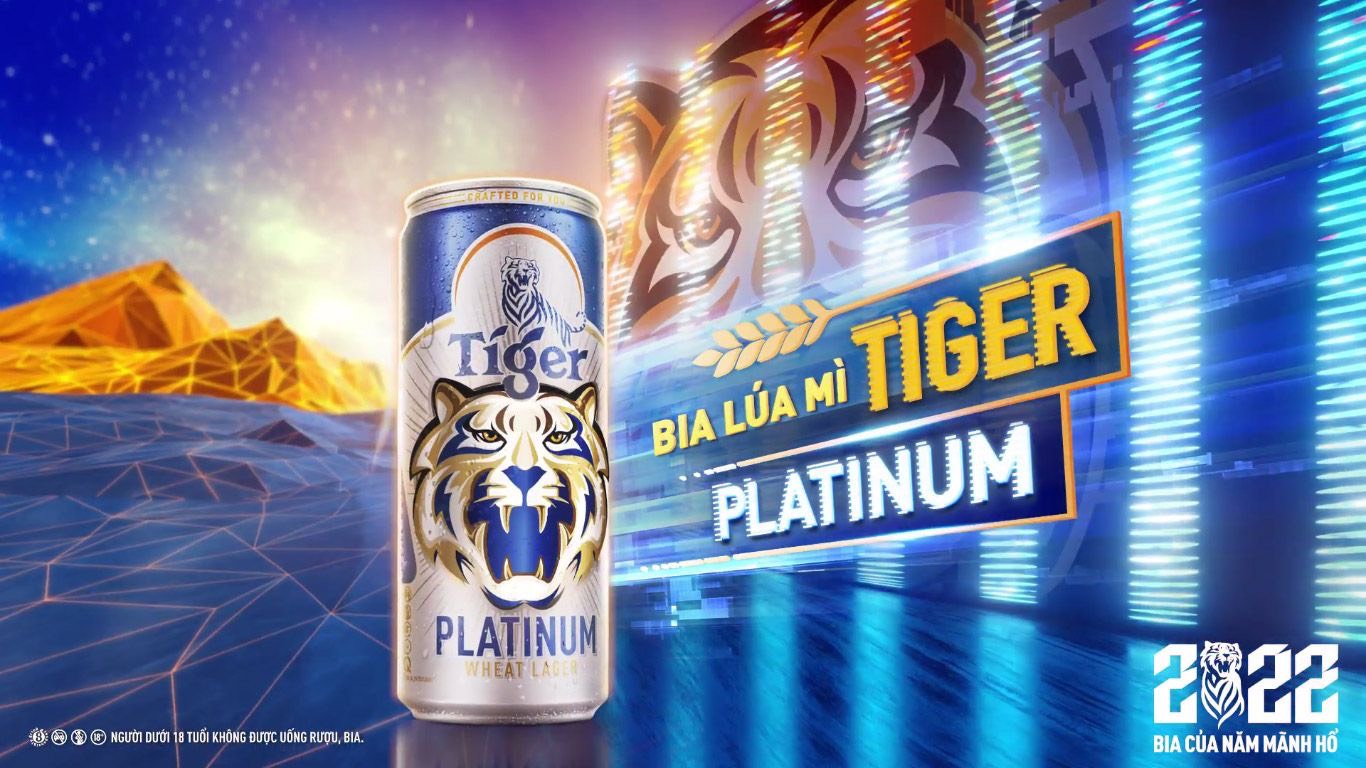 Since their introduction as an extension of Tiger, Tiger Crystal has remained incapable of driving brand TOM with clear own-able & unique imagery/characteristic, which has become further challenging after months of lockdown. Therefore, Tiger Crystal needed to hastily recover their share of the market.
As the leading luxury beer brand in Vietnam, Tiger Crystal promised to accompany the enthusiastic young generation on their path of exploring their burning passions - wherever it may be. Which is also inline with product functional benefits, that it is manufactured based on innovative deep freeze technology, ensuring a refreshing, easy-to-drink and brilliant flavor.
With the ambition of becoming a relevant brand that inspires the youngster to ignite the inner courage to follow their own path, not the crowd, Tiger Crystal needs to strongly establish their brand credentials in youngster’s minds. Besides straightforward communication, the selection of Influencer also played a vital part in highlighting Tiger Crystal’s spirit.
We prioritized choosing lead Influencer with a sufficient following audience to ensure the campaign’s coverage, yet maintaining the impact and inspiration towards our target audience in the top popular passion points among young consumers like fashion, music and entertainment.
Consequently, Tiger Crystal campaign aimed to bring together various passionate Influencers pursuing their career in diverse fields, which signified the brand motto: as for Music Rhymastic, Vũ Cát Tường, Ngô Kiến Huy x Jun Phạm, Lăng LD x Yuno Bigboi, DJ Mie x Hồng Thanh, for fashionista Cô em Trendy, Kỳ Duyên x Minh Triệu. These talented artists have continued to thrive furthermore after major successes in their careers. More importantly, they have always strived for higher success with their own strengths, specifically as:
- Rhymastic: has strong credibility in underground community and s one of the successful coaches of the Rap Viet TV show 2020 and 2021
- Lang LD and Yuno Bigboi: are the rising talents and also prominent contestants after the first season of Rap Viet
- Co em Trendy: started to become famous from a fashion reality show, and became one of the famous fashion trendsetter, having influence on Vietnamese youth, regularly attending international fashion week and leading latest trend
- Ky Duyen x Minh Trieu: are the most famous catwalk couple with many successes

To spread the spirit of Tiger Crystal to young people, especially on social networks, the target audience of the campaign remains young people in urban areas, regardless of gender, aged 25-35, who want to unleash and yearn to openly show their passion. In addition, Covid time has changed their social media habits significantly, digital consumption increased with twice online time spent (312 mins/ day in 2021 vs. 148 mins/ day in H2 2019). In which, following influencers and entertaining communities are the top activities of users on Social platforms.
In 2021, the Vietnamese people including both the youth and the KOLs/ Artists in particular, have been going through a tough period with the epidemic and prolonged distancing, which makes them gradually lose their enthusiasm and desire to show their passions. As soon as the end of lockdown, they need courage and inspiration to regain their enthusiasm and burn with passion wherever they are.
Lack of confidence, motivation and inspiration are the common answers when young people were asked about the limitations of the online lockdown for them and what makes them not free to ignite with their passions.
- "I'm not comfortable and willing to show my passion in public because I'm afraid of other people's disapproval"
- "I'm not good at singing so I never sing in front of my friends, I need a lot of encouragement from them"
- "I have a passion for fashion but I have not had the opportunity to show it, especially during the time of the pandemic and lock-down"
- "I like to rap, but society's prejudices about rappers which make me afraid to show my skills, in front of a crowd"
Therefore, according to the campaign's influencers, they received a lot of positive feedback and support from their followers for the activities and products related to their field during the epidemic season, even just very minor activities yet express their blazing passion regardless.

Following the key insights that there is no better feeling than when you are at the peak of your confidence, in the state of fire, Tiger Crystal initiated a campaign that is strongly relevant with target audiences via engaging activities and content to always connect with target audiences and ignite their inner courage and fire. Campaign focused on 2 key phases:
Phase 1 – Inspire: With the purpose to trigger and inspire young people about the spirit of Tiger Crystal “Cold Refreshment - Brewed For Your Fire" (Bật Sảng Khoái - Bùng Đam Mê), in this phase, the lead Influencers are the ones who always want to express their passion whenever possible because that is their enthusiasm and instinct in them.
Due to the impact of Covid, KOLs and artists have the need to express their passion on stage, on the catwalk, ... while users have a need of consuming entertainment content as well as finding inspiration for their passion. Since then, the main activity of this phase is to create an inspirational series of KOL's unexpected and surprising performances inspired by Tiger Crystal and encourage audiences to freely express their inner fire wherever they want.
Vu Cat Tuong: has bold and distinctive characteristics and a huge fan base, yet not having a new product launch for a long time. So her fans are looking forward to her new song. She inspiringly showed the improsive remix version of her top hit “Hành Tinh Song Song" with full of passion right at her home.
Rhymastic: as usual, he showed his uniqueness with a friendly image but still bold and different. Utilizing the familiar sounds of kitchenware to create the beat for his unexpected rap song when he was cooking in the kitchen, inspired by Tiger Crystal.
Co Em Trendy: she created a Fashion Show with proper preparation and fashionable outfits by herself right at home to surprise her followers.
The spontaneous burst of passionate performances in least expected places and contexts is the winning element to disruptively inspire social users, especially after people have just gone through a long lockdown. The performance videos of Lead Influencers are welcomed by the public and receive massive positive response from the audiences. As a result, the campaign was amplified in the most organically.
Phase 2 – Experience: Anywhere stage challenge - Get mixed gender young drinkers to experience this spirit in their daily life.
After a series of inspirational videos of lead influencers in the collaboration with Tiger Crystal, we announced a Social Challenge with a series of KOLs challenging each other to show their passions at random locations, helping to emphasize and spread the spirit of Tiger Crystal.
Kick-off with a series of KOL challenge photos with Tiger Crystal at random locations such as swimming pools, parking lot, elevators, bus stops... and dare other KOLs to transform ordinary places into inspirational stages to express their inner fire by showing special performances at locations where they accepted the challenges.
To spread this challenge widely on social media, the influencer plan is expanded from lead, supporting to micro level, creating a series of challenge videos and photos that young people show their passion in diversed fields such as rap, singing, fashion, dance, sports, ... anywhere. In order to create a halo effect as well as taking advantage of the influence of KOLs in the campaign, Tiger Crystal prioritizes choosing groups of Influencers who have public relationships with each other as close friends and couples. In addition, content also plays a critical role when Influencers challenge each other, community pages will dramatize satellite contents, in order to attract viewers to wait for the collaborated response to challenges from others.
Beyond the impact and inspiration from a series of KOLs’ performances, in order to enhance the key message, Tiger Crystal creates interactive activities with users through a AR filter contest “Anywhere Stage Challenge” through photos and videos format to encourage the young drinkers to participate in the trend. Focusing on young influencers like Anh Tu, Rtee, Mlee, Min in different fields - music, rapping, dancing, etc. to drive mass awareness and call for contest participation.

The campaign is promoted on the main platforms as Paid media, PR, Social Influencers and Communities to have effective coverage among target audiences.
On Social in particular, there is an effective and efficient allocation between Influencers and Communities for an inspirational campaign. In which, the Influencers channel accounts for 70% with the role of igniting and inspiring users, while the community page accounts for 30% to amplify the campaign message strongly.

- Lead Influencers: as the initiators of the campaign plays the key role with 62% of Social investment
- Supporting Influencers: following lead influencers to spread the inspiration with 6%
- Micro Influencers: who are youth representative playing crucial voice in participating the Anywhere Stage Challenge to reinforce campaign spirit - accounted for 2% of investment
- Community Fanpages: accelerated the social trend leading to the success of this campaign using attractive formats as meme or recap moment of influencers collaborative challenges. With a minimal level of investment 30%), yet still can drive discussion among social users.

This campaign has achieved outstanding effectiveness and efficiency thanks to the smart use of Relevant Social Media Influencers, which helped well spreading and enhancing brand spirit to the youth. The impressive statistics that Tiger Crystal has achieved proven campaign success as follows:
- Top 1 outstanding campaign on Social Media in November 2021 (BSI Top 10 Campaigns) with the highest Relevancy Score among Top 10 campaigns
- Achieved 1.2 million Buzz with competitive and high efficiency (CPB is 139% better than KPI)
- Gained 1.2 million interactions (264% vs. KPI) and 3.9 million views on Facebook (262% vs. KPI).
- More than 1,900 people participated in the AR Filter contest “Anywhere Stage Challenge”, reaching 113% vs. KPI.