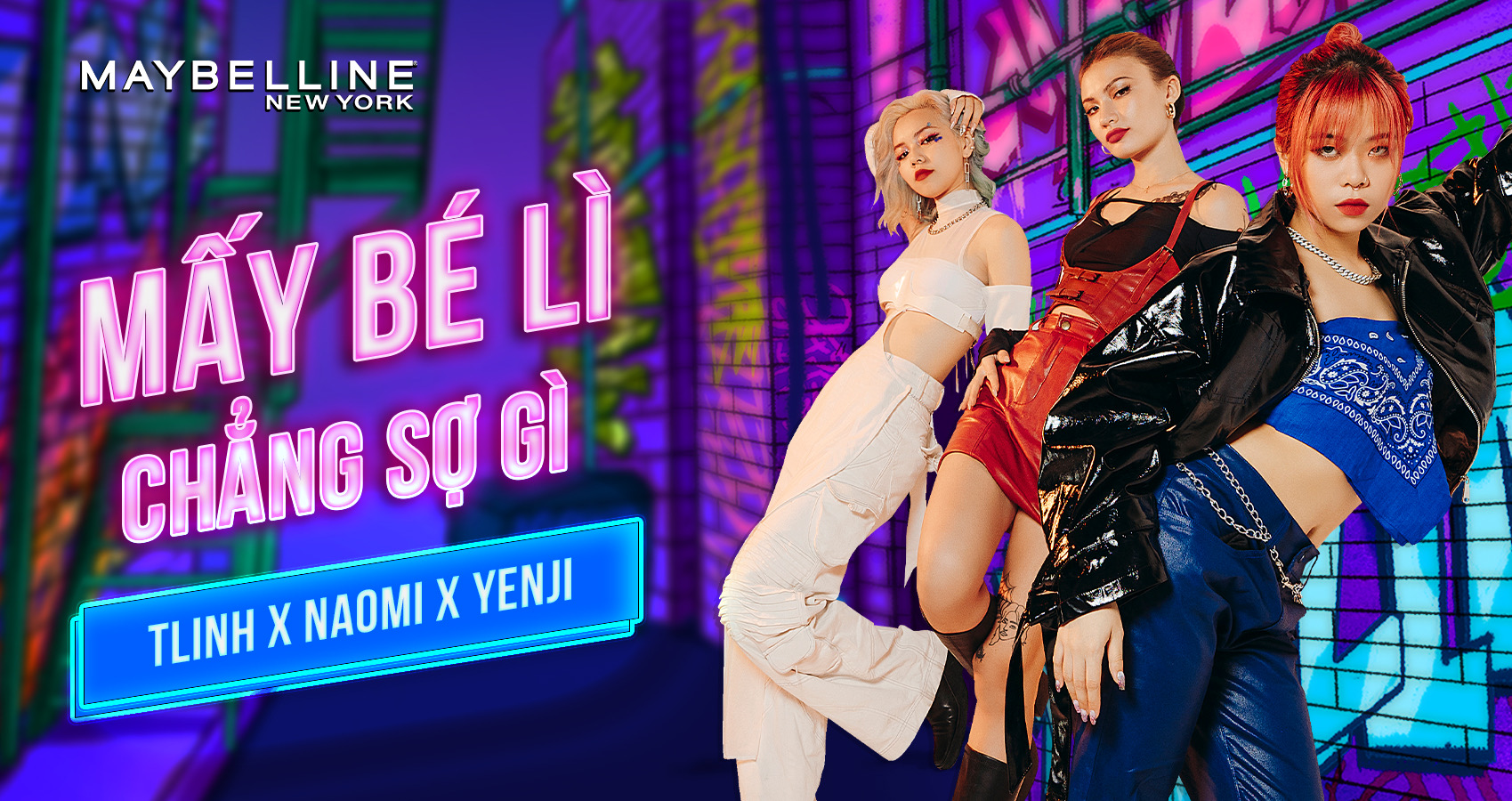 In 2020, the Makeup Category faced a serious loss of penetration due to the pandemic. As the number one Makeup Brand in Mass Market, Maybelline New York has a well defined need to recruit GenZ, due to their overriding importance as new buyers. While Maybelline has always been the brand that associates itself with the youthful and dynamic lifestyle of New York City. However, Vietnamese's GenZ feel disconnected with the brand's foreign image. Making it a challenge for Maybelline to win over.

Maybelline launched the “Mấy bé lì" campaign from April to May 2021 with the objectives:
Enhance brand meaningfulness to Gen Z with 2 must-win brand association: “Help women look more fashionable”& “Brand that shows me how to makeup”
Trigger brand talkability among Gen Z by winning share of social buzz in MakeUp
Strengthen the SuperStay Franchise- No.1 Longwear Franchise worldwide with the launch of Super Stay Foundation & shade extension of Super Stay Matte Ink Lipstick

To blend “Lì” platform closely into Gen Z’s social media touch points, we selected Facebook, Youtube & Tiktok to assert an engaging presence on all of them. According to statistics, GenZ’s top media platforms include TikTok (96%), Facebook (96%), YouTube (88%), Instagram(67%). Especially TikTok, the platform has high penetration and affinity among GenZ and the beauty community, making it the key mobile channel for this campaign.

In order to build relevancy with GenZ, we found the crucial, nonetheless intriguing links to our consumers.

First of all, GenZ is resilient in many ways. From online to offline social discussion, from giving voices on climate change to demanding eco-friendly products, this generation believes in the power of individuals to create change in society as well as pursues compatible values in brands. They are the generation that makes TikTok famous afterall.

Secondly, according to Vietnam Cosmetic Market research (Qandme, 2020), 43% of these unstoppable youngsters are interested in makeup but don't know how to do it yet, which is the biggest entry barrier in the make-up category. Thus, education becomes the second key to win this generation. Maybelline needs to be where Gen Z is present by teaching them how to put on makeup through their top occasion of needs.

Gen Z is a resilient generation that demonstrates through their straightforward actions and thoughts. Along with it, Maybeline's SuperStay Product Line has been celebrated for its long lasting attribute. Therefore, by marrying Gen Z's "resilient” personality as well as "long-lasting" USP of the SuperStay product line (Matte ink & foundation), we created the platform of "Lì Generation".

“Mấy bé lì" campaign idea was soon derived as it consisted of a strong brand recall & positioning where Maybelline can make chất lì together with GenZ by empowering individuality, putting them in the spotlight & becoming their go-to makeup brand in top relevant occasions. So MAY-BEL-LINE is just like Mấy-bé-lì.

Maybelline now embodies modern women empowerment - not setting an ‘unstoppable’ standard but calling for girls to embrace diverse uniqueness within each of them. So that in the end, the Maybelline story is also a GenZ story, told by GenZ, in the truest GenZ form and language.

To approach the trendiest generation, on-trend factors were considered to be a main pillar. We choosed Rap Music – The Genz’top music gerne in the time of launching campaign & also used the popularity of Naomi, Yenji, especially Tlinh (Tlinh was a prominent female contestant at Rap Viet 2020 program, she grabs full attention of the Vietnam Hip-hop lovers & Gen Z) to prompt powerful word-of-mouth on social media

To push awareness, the MV was teased on the brand’s social platforms then launched on Youtube. It uses influential rap flows and striking visuals to showcase a series of "Lì'' components to express the product USP of "long lasting" through GenZ's unique personality (Girlì, Crazilì, Lovelì).

To meet GenZ at every step, from the thematic MV, we went full-funnel. The MV was adapted into a series of mobile-friendly ads on social media that used ambassadors' images on all assets. From e-commerce to onsite & offsite media (CPAS ads), including the Shopee app.

To encourage users to engage & create their own user generated content, we created Tiktok dance challenge with our ambassadors which gained 173 million views in only 5 days & leveraged the #TiktokMadeMeBuyIt trend to highlight our product benefits.

Mấy Bé Lì campaign allocated ~90% media budget to mobile and was executed across on top mobile platforms (TikTok, Facebook, YouTube) of GenZ to capture the whole consumer journey from awareness, engagement to purchase.

During the first week, we built the massive hype via TikTok to leverage mobile-exclusive technology (i.e. Branded hashtag challenge and Branded effects) on TikTok to establish a viral product launch and nudge users to interact with the brand via UGC.

YouTube and Facebook followed to help amplify the campaign’s core asset – the MV. YouTube trueview aimed at contextual targeting to gain massive MV views and ad relevance at scale. Based on GenZ’s interest and their consumption habits, we shortlisted relevant YouTube content and channels that spoke to GenZ’s passion points and maximize brand’s SOV there.

Instead of purely boosting MV on Facebook which was not ideal for long-form video assets, we leveraged branded content posts, collection ads & shorter mobile versions of the MV. Three ambassadors promoted the MV on their FB and Maybelline helped boost these posts to amplify the reach. We also reinvented the wheel of collection ads, turning them into a “human catalogue” showcasing MV’s key hooks.

Finally, to close the loop and drive purchase on Maybelline's Shopee store, we became the first brand to leverage Facebook CPAS ads. Not only we made use of ambassadors’ image in full force but also boosted the purchase intent of the influencers’ followers. Data also played a significant role in this phase, helping MNY to retarget each audience segment with the relevant message. Flawless integration of tech and data boosted conversion rate and delivered sales as a result.

In a short period of 2 months, the campaign exceeded expectations with metrics as followed:

1/ Brand Health Check
For must-win brand association between before and after campaign:
“Help women look more fashionable” increased by 11 points.
“Brand that shows me how to makeup” increased by 9 points.
(Data from Kantar, July 2021)

2/ Quality Buzz Generated
Social Buzz: 185,000 buzz, No.1 Buzz in MakeUp category, Top 4 in BSI in April
With 48% UGC buzz from TikTok, winning SOV on the key Gen Z touch points which are TikTok and Facebook.
Achieve 99% positive sentiment score for SuperStay product line during the campaign