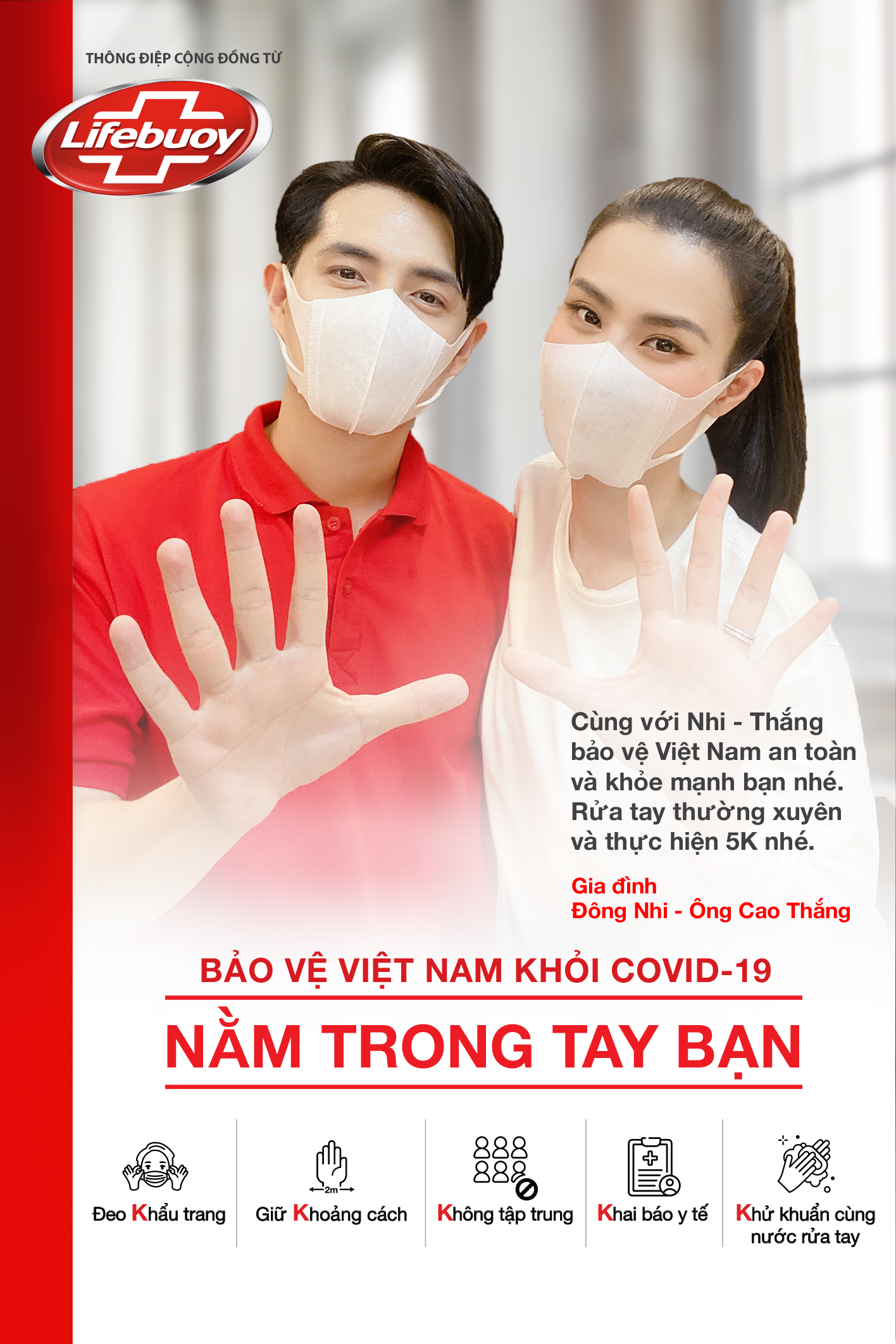 Covid Wave 4 has been lurking across cities in Vietnam since the end of March 2021, marking the longest and most severe outbreak ever since its first hit in beginning of 2020. For the first time, Vietnam, the country ranked second place worldwide in controlling and preventing the outbreak, had witnessed thousands of new cases popping up every day. The heavily hit areas are urban districts with high population density since majority of people still commute to the workplace and it is a challenge to keep proper distance.

The Ministry of Health (MOH) had issued the 5K Regulation, highlighting the key actions people need to take in order to keep the outbreak under control. The 5K consists of: (1) Do not gather or go out unless necessary, (2) Always wear a mask, (3) Keep a 2-meter distance, (4) Remember to accurately declare your movement, and (5) Wash hand frequently. Despite having the 5K regulation displayed in every corner through street banners, TV news, and pushed notifications from MOH, consumers’ recall of the message was fragmented as they could not remember all the 5 actions. The message was lengthy and complicated for every citizen to remember and comply with, leading to ineffective precaution.

When all the primary cities in Vietnam were flooding with new cases in mid of April, the confusion spread across the country. District by district went into quarantine mode, buildings after buildings were locked down and isolated when the citizens were unprepared. Fake news about Covid-19 spread expanded aggressively on Social Media that caused stress and negativity everywhere.

As a brand that stands for safety, and reassurance of hygiene, Lifebuoy needed to find a solution to help consumers better equip themselves against COVID-19 through the 5K compliance and be fully aware of the situation in their neighborhood with the most accurate information sources.

Time spend on social media has reached all time high (average 3.5 hours per day; Source: GroupM Knowledge, 2021) during the distancing months, as consumers craved for connection with their communities and loved ones. Information, therefore, was broadcasted and shared much faster on this platform. Increased time spend at home also provided the brand with new Media channels (such as indoor LCD screens) to reach out and communicate with its consumers. However, a valuable insight that Lifebuoy had discovered was that Vietnamese preferred to have information updated by word-of-mouth through their trusted influencers, communities, friends, and family members rather than having them coming from Government body. That was why misleading information could spread in such a short time. Even though the MOH had developed a website to update the outbreak status across district on a daily basis, no traffic was recorded arriving and consuming information there.

The brand also realized the reason consumers did not pay attention to the MOH’s 5K message was because it wasn’t illustrated in an appealing way. What consumers needed at the time was the spark of optimism, motivation, and cheerful message instead of the scare tactics and visuals. If Lifebuoy could turn the message into an Edutainment piece of information, there would be higher chance for the message to be more prominent, eye catching and memorable.

Support and inclusivity have always been embedded into every Vietnamese’s DNA. Whenever a certain district got locked down, the community would gather food and household goods to donate to the quarantined sites. There was a huge opportunity for Lifebuoy to scale up the support for red-zoned areas through community crowdsourcing.

In short, Lifebuoy needed to link the cultural and behavioral insights to create a cut-through approach.
- Social Distancing created pathways for more specific Media choices for brand to communicate.
- Make the communication cheerful, optimistic, and light-hearted. Make it edutainment.
- Users trust their community/influencers for news updates.
- The community possesses high sense of support and inclusivity.

Lifebuoy’s objectives & campaign ideas, in linkage with the consumer insights, were to:
- Turn the 5K message into a National Communication by turning it into a catch dance song. The lyrics were written by a young artist that could hold appeal towards the young and most active on Social media group of audience. - Lifebuoy could leverage this group to create talkability around the song and spread it to the older age groups, hence increase the opportunity of exposure and recall towards the 5K message.
- Partner with the most credible group of influencers, use their voice to spread out encouraging messages to consumers at scale, to uplift the spirit of consumers in difficult time.
- Create the most accurate Hyper Covid Alert System, of which real time outbreak & recovery status could be automatically updated for every single district in Vietnam, and alerts could be blasted out to consumers immediately, especially for the red-zoned areas.
- Encourage consumers to wash their hands with Lifebuoy, not just with water, to ensure the best hygiene condition for themselves and their family by having always-on promotion schemes on all E-commerce platforms. The products were made accessible at more affordable price for consumers.
- Activate “One Lifebuoy Bought, One Lifebuoy Donated” initiative, of which consumers could contribute their support through purchases when they could not physically go out and support their community. Lifebuoy, on behalf of the consumers, would donate products to the quarantined sites where people did not have access to hygiene products.

1. Turning 5K Message into a National Communication
Lifebuoy partnered with a series of trusted influencers to spread out the 5K actions and encouraging statement “Protecting the nation against COVID-19 is all in your hand” to uplift the fighting spirit amongst the community. The series of posters were displayed in multiple Digital platforms, as well as over 23,000 Out-of-home LCD screens in supermarkets and apartments across Vietnam.
Next, the brand turned the lengthy 5K message into a catchy dance song that could be memorized within seconds. The song became trendy amongst the young target audience the moment it was released. Thousands of covers of the dance were published by the community together with sharing and callouts for 5K adherence, as well as purchasing Lifebuoy products to support for the quarantined sites.
2. The Hyper COVID Alert System
With the rising of fake news on Social Media, causing confusion in the community, Lifebuoy needed to develop a real-time update mechanism, and leverage Social as the primary platform to blast cautions to its consumers in the most accurate manner. The Brand partnered with the Ministry of Health to gain back-end access to their information portal, containing the most timely and accurate update regarding new cases, recovered cases, locked down locations, red-zone or safe-zone status for every ward and district across cities in Vietnam.
A bot was created to crawl all updates as soon as they were loaded onto the portal and notify the brand in real time. Over 100 creatives were made in response to every outcome possible for more than 50 districts, and dynamically served to the consumers based on their locations. For example, when district 7 in Ho Chi Min was diagnosed with more than 20 new quarantined buildings and officially listed as red-zone, a red alert would be blasted to all citizens in district 7 to inform them that they should take precaution, stay home and follow the 5K actions to be safe. When district 10 was no longer marked as red and people could travel in moderation, a recovering alert would be sent out to all citizen in district 10, remind them not to travel extensively unless required, and remember to follow the 5K actions.
Every alert came with a call-to-action that directed consumers to E-commerce, where they could find attractive offers to buy Lifebuoy products and contribution their donation to the quarantined sites

Result
- The campaign was created tremendous impact within short time span of launching.
- Lifebuoy was able to reach out and alert to more than 14 million people in Vietnam.
- The Hyper Covid Alert System has acted as an effective information and call-to-action platform, generating Engagement Rate 15X higher than industry benchmark.
- After 5 days of releasing the song, 127,000 social discussion were generated, and over 250 covers of the dance were made.
- Within 1 week of launching, the 5K Dance Song has received half a million search queries. The original 5K Dance Song released by the Brand delivered Engagement Rate 37X higher than benchmark, where users expressed their enthusiasm and showcased their dance covers of the song.
- Inspired by the edutainment content developed by Lifebuoy, TV Stations across the country had picked up the song and broadcasted on their networks to share the same purpose, without a single penny paid from the Brand.
- Together with the support from PR networks, an earned Media value of 10 billion VND was recorded.
- Market Share of Lifebuoy had reached an all-time high at 92%; E-commerce revenue had uplifted by 179% thanks to the “One Lifebuoy Bought, One Lifebuoy Donated” initiative, resulted in 1.2 million Lifebuoy products being donated to quarantined sites, vaccination centers, and hospitals across the country.

Lifebuoy, together with all Vietnamese citizens, will win this war against COVID-19, empowered with the 5K weapon.