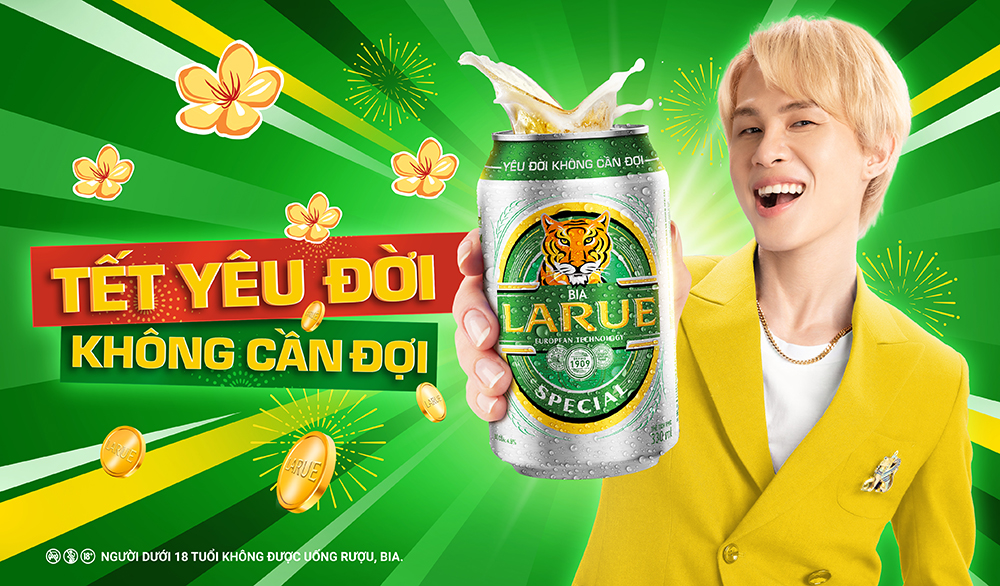 Larue has always been one of the most popular choices for gatherings & parties, thanks to its attractive color & refreshing tastes. However, Covid happened, cutting deeply into the beverage industry; and the social distancing made the brand role irrelevant in such circumstances. Hence, relaunching this Tet, Larue’s most critical task is not only building awareness but also creating a new meaning that could elevate the brand & driving both short- & long-term sales.

Following Larue brand communication message of “Let's be cheerful, No need to wait" (Yêu Đời Không Cần Đợi), after Festive-relevant activities on social, Larue followed up by an event to welcome Tet to reinforce campaign spirit and hype up cheerfulness right before Tet to bring joyful Tet atmosphere to consumers. Larue has always represented optimism & cheerfulness, empowered by that spirit, we encourage people to celebrate Tet with cheerfulness regardless of how tough the past year is, it will be over and aim to spread this positivity to mass audiences. The event with the theme of Larue train station to maximize relevance by the most familiar cultural image of Vietnamese people - going to their hometown for family reunion in Tet season, so this Tet, Larue is the Tet train to transport and spread cheerful spirit to Vietnamese people. Starting from a very meaningful purpose, yet how to make it happen given Covid restriction of avoiding offline public gathering is a big challenge.
Larue brought “GaLarue" event to users via an innovative format - Virtual Music Event, with full of joy, fun entertaining activities, and attractive rewards to audiences.

New media behaviors arise in Covid time and have prolonged as new norms. Digital consumption increased with double online time spent (312 mins/ day in 2021 vs. 148 mins/ day in H2 2019). In terms of the need of entertaining content and engaging connection during pandemic, Social has experienced an aggressive increase in users across top 3 popular platforms (Facebook increased 27%, Youtube increased 26%, Tiktok increased 36% in Q2 ’21 vs. Q4 ’20). In which, video live streaming has been emerging as a big trend (time watching live streaming increased by 220% during Covid period), thanks to its live interaction possibility, that enables users to engage and connect with brands, with KOLs and with their communities.
Thus, Social is the main platform to host GaLarue Virtual Event via livestream format, as well as to amplify for the Event, which well attracted users with high viewership and engagement.

GaLarue is a smart slang approach for this Tet event, which was played between Gala of Larue and Ga Larue (Larue station) to trigger excitement of users, yet still can well contain the Event theme and context as A GALA NIGHT OF LARUE BEER, where to transport and spread cheerfulness and positivity to audiences. To drive effectiveness and viewership for the Event, we focused more than 70% investment on Social with key following activities.

Phase 1 – Teasing Pre-Event:
Around one week before the Event happens, Larue leveraged the top popular communities to trigger users' excitement about the highly interactive entertainment event and call them to stay tuned till January 22nd 2022 for the official event.

Phase 2 – During Event:
GALARUE was hosted officially on Larue Youtube Channel and Larue Facebook Fanpage, which was crossposted livestream on more than 20 community fanpages, OTT and TV channels. With this strong and massive scale channel list, it had driven huge awareness and views for the event.

The show did not only attract users by the hot artists who are mass and mainstream-relevant ones, but also by the visual investment and the awards of engagement activities during livestream. XR technology is the new innovation of combining reality and virtual environment view for users, which is multidimensional space for artists to perform, bringing extremely sharp visuals. Furthermore, during the event there are 2 unexpected explosion moments for users to collect hundreds of vouchers when no. of comments hit a certain level. With a friendly and mainstream-relevant voice to bring a joyful and fun activities, the event well attracted mass audiences with scale.

Phase 3 – Amplify After Event:
GALARUE, with surprising and explosive performances from the top artists Nguyen Hung, Karik, Ngo Kien Huy, Larue have done different ways of amplifying for the event. Instead of amplifying after event 1 day, we re-up cut-down performances of the artists on relevant community fanpages right after their live performance. Which helped hype-up the heat of the event and gaining more new users to join the livestream event.

Following the new norms of user media behaviors after Covid, Larue invested 100% budget on Digital channels, with more than 70% focusing on Social since this is the most effective and relevant channel for online entertainment show which officially hosted on social platform like Youtube and Facebook, while PR and Media played the role of spreading stronger for the event.
On Social, Larue focused completely on Community fanpages focused around 60% investment for the top popular and mass community fanpages, then expanded to variety of community genres with 40% budget, like Music, Showbiz, Celebrity's Fandom, Top Entertainment Networks (Yan & Yeah1), and Regional pages to ensure region-focused coverage, … which strongly helped maximizing coverage and attracting more users for the event.

Given many challenges due to Covid restriction and budget constraint, GaLarue happened to successfully deliver its meaningful message and spirit of a cheerful and happy Tet to audiences, which proven by impressive results:
- Top 1 Social Campaigns on Social Media in January 2022 (BSI Top 10 Campaigns). In which, more than 90% of buzz was gained during livestream.
- Gained 2,874,573 Views for the Event within 24 hours