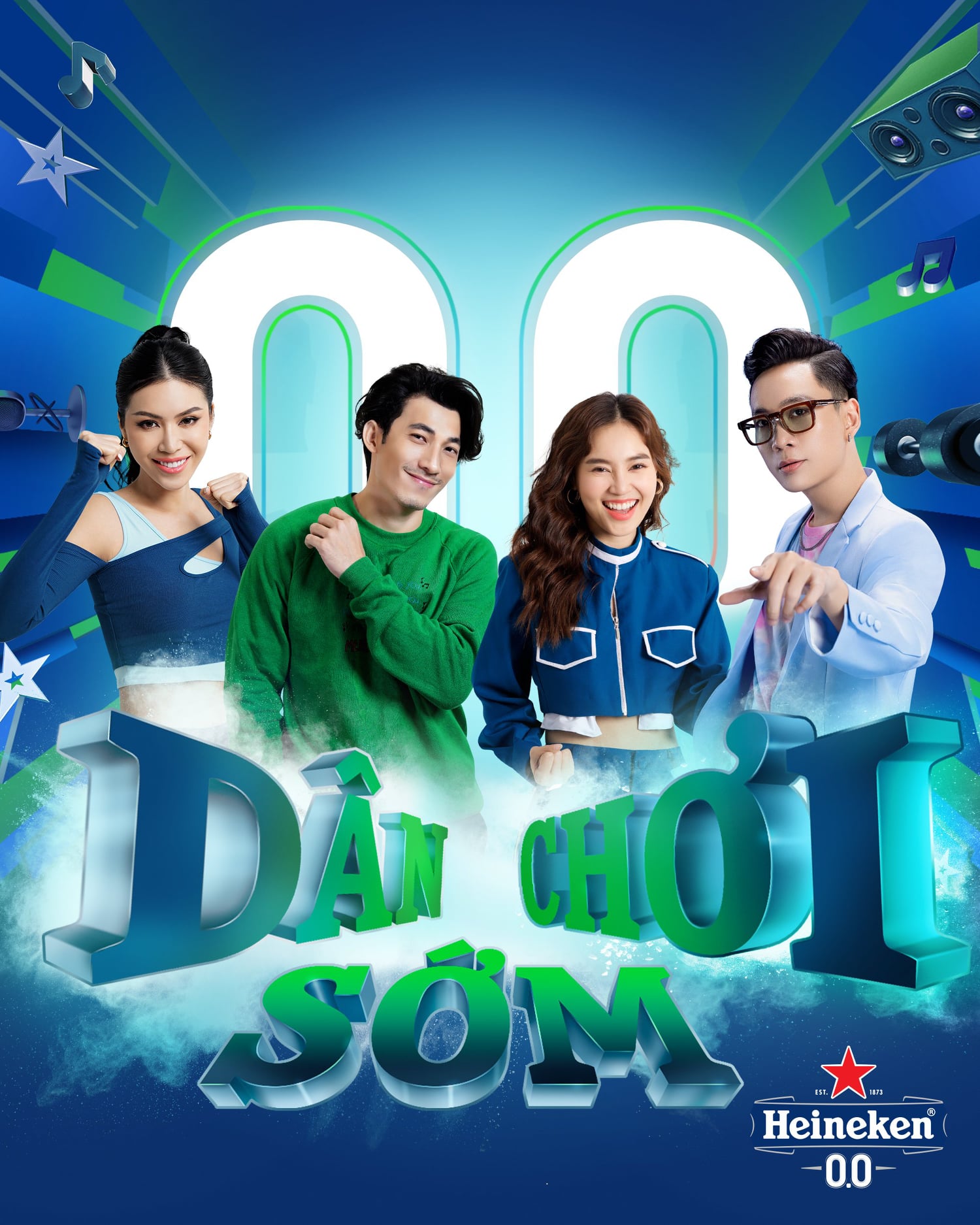 Launched in early 2020 in Vietnam, Heineken 0.0, a new line of Heineken with 0.0% alcohol content, was expected to meet the rising demand of consumers for a health-conscious, worry-free but still enjoyable drink. Despite its potential, the infant Heineken 0.0 hit a formidable barrier in the perception of Vietnamese consumers, who associate drinking beer with “being drunk” and “being fun” as they often say “not leaving until drunk”. Thus, the key goal in 2021 for Heineken was to inform and educate this new kind of “being fun”, “being enjoyable” whenever, wherever and worry-free of “being irresponsible drunk”.
There is no better strategy to sway the public than trusted voices via Social media platforms, thus it was the way of Heineken 0.0 to launch the “Now You Can Celebrate Anytime" Campaign, to smartly educate product relevant consumption occasions. Riding on the hit of rap song “Dân Chơi Xóm" in 2020, a parody of this hit was created - “Dân Chơi Sớm” backed by its key singer JustaTee as the initiator, and mass of supporting KOLs and influencers was expected to shift the behaviors of consumers and create a social movement of “celebrating anytime".

Heineken 0.0 targets GenZ and Working Millennials, those that have a healthy lifestyle, trend-setting, open mindset and progressive attitude. They are the NOW generation of digital natives who want and embrace the desire of instant gratification. Social media is their natural habitat, providing them with information updates, source of entertainment and means of communication. The colorful social life of the NOW generation is not marked with milestones, but rather a collection of thousands of sparks that are worth celebrating. And no better moment to celebrate than celebrating NOW with Heineken 0.0, an enjoyable yet worry-free type of beer.
The Now generation strive for the best and admire the best so KOLs and Influencers on Social media are the best voices to spread the Heineken 0.0 spirit of “Nothing Impossible” and the message “NOW you can celebrate anytime”.

The spirit and message of “Nothing impossible. Now you can celebrate anytime” of Heineken 0.0 was fully conveyed through “Dan Choi Som” MV, a parody based on last year's hot rap song by JustaTee, expected to leverage the halo effect of the original hit. The MV promotes an attitude of spontaneous fun on multiple occasions.
By means of a variety of celebrities, influencers and communities across tiers and types with diversified content formats that are audience-friendly and genZ signature such as: memes from cut scenes in MV, food review of Heineken 0.0 with different dishes in everyday moments, … The message was warmly welcomed across Social media platforms helping to drive organic view for the MV, combining with paid media efforts, which led the MV reach Top 12 Youtube trending and staying on top for continuous days. The campaign was activated through 3 phases to register brand communication message to users' mind:
Firstly, we kick-off the campaign with teasing social posts from JustaTee and other lead KOLs with a huge fan base to attract the attention and trigger curiosity of users on Social. Thanks to the seamless interaction between our KOLs, the users were eager to join the conversation, further spreading our message on Social and gained us lots of earned media.
Upon launching the MV, multiple contents of Lead KOLs, micro KOLs, and community appeared densely to boost “Dan Choi Som” and at the same time the message of “Nothing Impossible. Now you can celebrate anytime”. We further elaborated different celebrating occasions that go well with Heineken 0.0 in the following posts of KOLs such as working, traveling, exercising… to build up brand involvement and brand role as a catalyst of the “Spontaneous Players” (Dân Chơi Sớm)
To complete the campaign, we present the consumers with a chance to become a Player and a part of the “Spontaneous players” gang. The microsite idea came from the sense of belonging of the Now generation, and the popular Top badges on Social; each user can create their own Player identification (Căn cước dân chơi), such as “Workaholic Player”, “Gymaholic Player”, “Foodaholic Player”… The identification represented their unique and different traits in a lively way that much sharable helping Heineken message went viral on Social platform, especially the slang of “dân chơi" became a trendy slang at that time.

To achieve the goal of shifting consumers’ perspective about Heineken 0.0, we decided to focus on Digital and Social as the key platform for success; other channels OOH, offline sampling as supporting channels to increase mass awareness.
We leveraged a mix of key Social channels such as Facebook, Youtube, Tiktok to promote the “Dan Choi Som” MV with well-coordinated phasing and investment on each channel based on their roles.
Influencer’s marketing is the main strategy we employed to sway the public opinion:
Lead KOLs must be those fit with brand image and the essence of the campaign and can represent different occasions that Heineken 0.0 aims to: work, sport, food and on-the-go. They are also well-known celebrities with a large fan base and a reputation of being closely connected to their fans to ensure substantial engagements during kick-off and to create a “playful” atmosphere for the campaign. So we invested a majority of the social budget on this channel at 62%.
Supporting KOLs/ Micro influencers with around 15% social investment, also need to have a suitable personal image with Heineken occasions, who play the role of spreading awareness of the campaign, and have social interaction and good chemistry with the Lead KOLs to maintain the engagement and keep encouraging users to join the gang. We recorded considerable earned media from the organic engagement between KOLs as those interactions soon to become another trend on other Social channels.
Community pages accounted for 23% social investment, played the important role of diversifying content formats and initiating content trends to trigger curiosity and attention from users to the MVs and brand’s message.