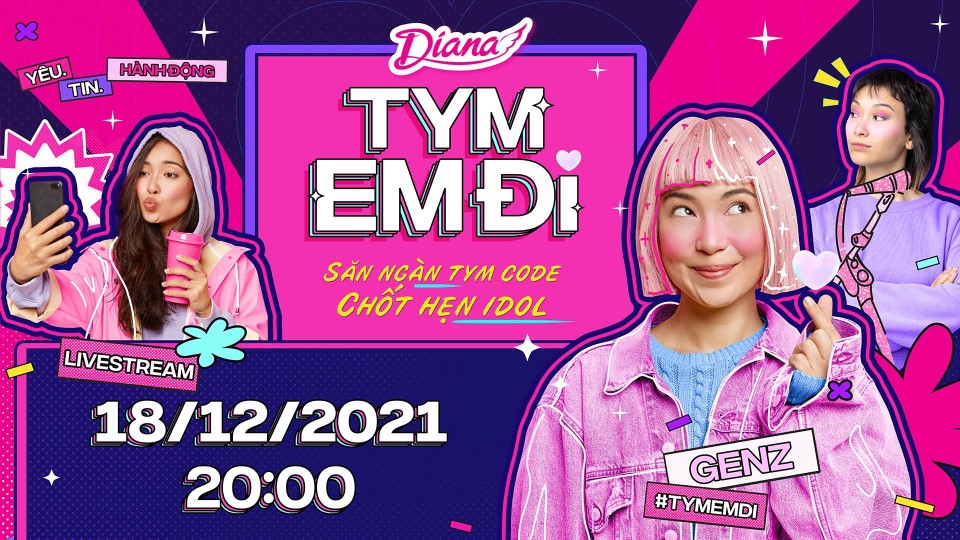 The Background and The Challenge:
Diana is an inspiring brand for girls with their Brand promise: “It’s great being girls” and “Love. Believe. Do” message. Their signature music events always convey the message to encourage girls pursue doing what they are passionate. But Diana has now postponed their offline music concert at the middle of 2021 due to the context of Covid-19.

To continue confident momentum for girls that Diana has built over the years, how would Diana leverage Brand love with their fan girls in the pandemic situation?

The Strategy
Celebrate GirlZilla who dared to follow their passions by the insightful Creative Idea and Execution plan: shifted Diana offline music concert to the online livestream event at the end of 2021.

To spread out the Campaign, Diana has come along with KOLs & communities so as to engage and CTA fans girls participate in the event activities.

Gen Z girls have been loving, believing & doing on their own. With Gen Z, it is extremely important to experience the most out of life, and that means doing what they are passionate about. Nothing can stop them at that.

Spark from 1 signature online behavior - trademarked by teen-girls every time they support something on social media: dropping a heart, why not turn this simple - yet universal reaction to a solid statement on girls' passion - from us girls.

The Campaign Objective:
Build awareness of livestream event
Maximize users engagement with activities before event and during event
Call to action participants to livestream event

The Creative Idea:
Diana believes: Just by something simple as a heart reaction, girls’ passions that’ve overmastered all barriers, deserve a public supporting ovation - not with claps, but with thousands of hearts.

The Execution Plan:
The Campaign has started the social movement by event announcement on Diana’s fanpage and KOLs, Communities has reacted to trigger fans’ curiosity about the Key message and the upcoming Livestream event.

STEP 1: “SĂN NGÀN TYM CODE, CHỐT HẸN IDOL” by AR FILTER
Diana has rolled out the comprehensive the Digital campaign via activities before event. With an impressive and interactive AR filter, Diana has utilized the social key assets to maximize engagement with fans who have taken AR filter’s photo with KOLs and got code for exclusive incentives/ activities during event and after event on Microsite.

STEP 2: “NGÀN TYM CODE” SOCIAL MOVEMENT by INFLUENCERS
KOLs has driven user’s attention with key message, CTA participants join livestream event. There were also many content on Diana’s fanpage to keep heat and recruit users. The social wave is created and spread out by many KOLs, influencers.

STEP 3: AR EVENT #TYMEMĐI
The Diana Super Show is the first time ever online music concert that has been social fever during 3 weeks. It has really generated the greater social media impact with Sơn Tùng, Erik, Đức Phúc, Amee… in the pandemic thanks to #TymEmDi campaign message and the Digital roll-out campaign.

Media performance
- More than 1.1 million online views (CCU) during the show's time on the night of 18th December on both Diana and head banner of Kenh14.vn at the same time (exceed KPI 200%) and more than 18,000 visitors to Microsite.

Social performance
- The campaign has the significant buzz volume: 303,243 and contribution (95%) to total buzz of Diana in Nov - Dec and helps Diana strengthen no.1 total buzz’s SOV in the marketplace.
- More than 29% SHARE OF VOICE that exceed offline event in 4/2021
- The campaign gains good sentiment score (0.98) with positive feedback from KOLs in Diana Super Show and event’s quality.